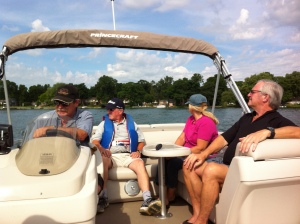 We are fortunate to have very good friends who own a cottage on the shores of Lake Couchiching in Orillia, Ontario. They also have a pontoon boat and take us out on it when the opportunity arises, When planning a weekend at their place last summer, our friend asked if we’d like to boat up to the Big Chute Marine Railway. Who could possibly say no to spending a whole day on a boat meandering a waterway that leads through some of the loveliest scenery, to an engineering marvel? Not me that’s for sure. So we made plans, packed up some snacks, lots of water and of course sunscreen, and prepared for our boating excursion. No alcohol involved as it’s frowned upon when boating and against the law for the skipper to drink when boating. Knowing this would be a whole day, we set off pretty early, just after breakfast and prepared to enjoy. Let me give you a brief history of the Marine Railway and the Trent Severn waterway it accesses.

The waterway itself extends from Trenton in the south on Lake Ontario, up about 386 kilometres to Georgian Bay on Lake Huron in the north. The boats pass through a series of locks, swing bridges and under taller bridges. The small portion we were boating through would take almost nine hours to traverse, involve three locks and a swing bridge. Samuel Champlain was the first European to travel the entire distance in the 1600’s and he would have had to portage several times carrying his canoes overland to avoid waterfalls and rapids. The route was later canalized and in 1833 construction of the locks began. It took eighty-seven years to complete and by 1920 a boat could complete the route. Initially the system was built for industry but is now used for recreation and tourism.

Travelling by boat is not about racing up the river. There are speed limits enforced to protect other boaters, swimmers and water craft. We enjoyed the magnificent scenery and peeks at cottages along the way, marvelling at the ones that had a hundred stairs from cottage to lakefront. If I was in one of those I’d take a full day’s supply of whatever so I didn’t have to walk those stairs three or four times, unless I had a weak bladder.

So we chugged along slowly and quietly, enjoying utter relaxation that only the water can bring. Our boat, even with the canopy up, was low enough to go under the swing bridge, barely, and I held my breath as we went; whew we made it. Then on to the first of the three locks. when travelling through a lock, we had to drop the bumpers over the side and attach to a metal ring so we didn’t float all over the place. You drive in, get ready and the lock doors close behind the boats. The locks can hold quite a few boats and you just sit there and let the water level do its thing. It was my first time in a lift lock so really exciting. The walls look so high, probably twenty feet or so, the water is let in through unseen pipes I presume, and we just slowly rise to the level of the next part of the river. On the return trip the process is reversed. It really doesn’t take too long to go through each lock. I wish I had timed it but I think no more than a half hour at each one. Of course we did extend that a couple of times for needed bathroom breaks. The waterway meanders off in different directions but fortunately, the folks at Parks Canada have erected large, painted signs so we didn’t get lost. Well actually, we did once but that was because the sign was covered by overgrown brush and we didn’t see it.

Finally we came to the Marine Railway! It is so neat! First you gently float your boat into a cradle of sorts. There are helpers to get you straight and they place slings under the boat front and back that are then attached to the mechanism. Each boat is cradled separately, there are front and back wheels for each to keep the boats level and the slings keep your boat steady. A system of hydraulics raises your boat out of the water, on rails, about sixty feet up and then down the other side where you are gently deposited into Georgian Bay, unhooked from everything and off you go to explore some more. It seemed that the whole bay is visible from the top of the railway, just gorgeous!

We didn’t have time to explore very far into the bay as the locks close at seven pm on the weekends and we had to get back but wow I hope we get to take a weekend the next time we do the trip!